In 1990 Grandmaster Pellegrini officially named his style of Hapkido “Combat Hapkido”. The name clearly identifies it and sets it apart from other “traditional” styles of Hapkido. It is also referred to as the “Science of Self Defense”. In 1999 the Combat Hapkido System was officially recognized and accredited as a legitimate “Kwan” of HapKiDo by the WKF/KKA (Kido-Hae). The Korean name of Combat Hapkido is “Chon-Tu Kwan HapKiDo”.

Combat Hapkido is an extremely realistic and versatile discipline of self protection that includes an extensive variety of strikes, kicks, joint locks, pressure points, grappling and disarming techniques. The result is a practical, comprehensive Self Defense system that is enjoyable to learn and that produces effective results in realistic situations.

Combat Hapkido’s dynamic concepts are based on scientific principles of anatomy and biokinetics as well as psychology and strategy. It is well suited for men and women of all sizes because physical strength and athletic abilities are not essential. The emphasis is on redirecting the assailants’ aggression and power back toward them with little effort and minimum force on your part.

Founding this system did not involve “inventing” the techniques. It was a matter of selecting the most realistic, effective and practical ones, modifying others and then combining and arranging these techniques in a structured system of instruction designed for individuals of all physical abilities living in a modern society. 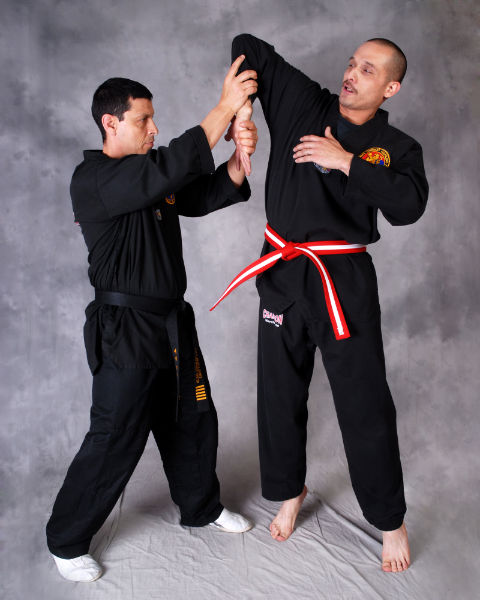